Uklon research: how Ukrainian regions return to the life 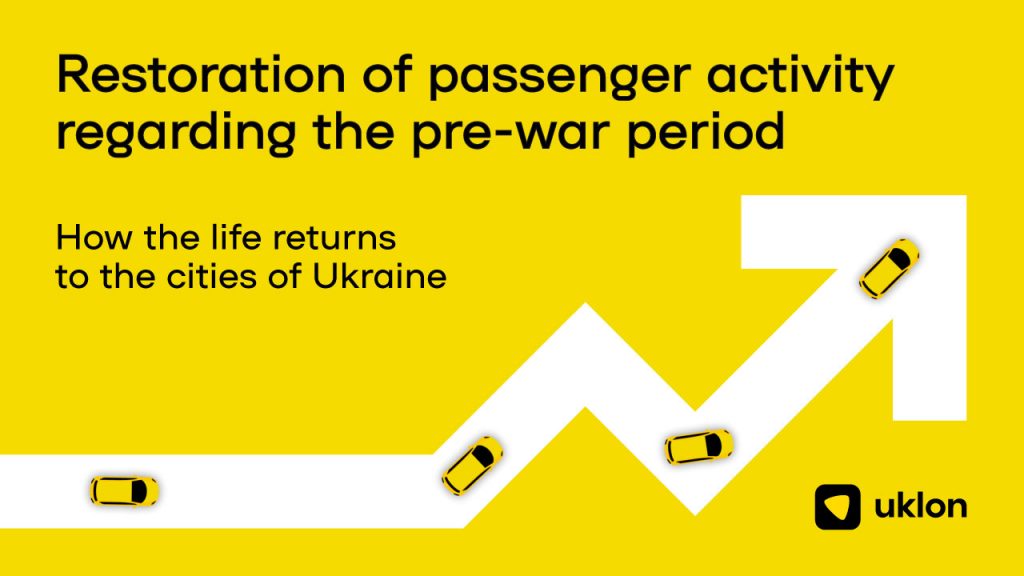 The Ukrainian online-service of car calling reviewed how the lives of Ukrainians are restored through travels with Uklon. Our specialists processed a massive data set to analyze in which cities the positive dynamics of passenger traffic growth is noticeable. They also studied the migration within the country since the beginning of the full-scale war.

In this study, the team of the Ukrainian IT company of Uklon, the developer of the eponymous car call service, analyzed the parameters of the application in the period “until February 24” and up to current moment, including May.

The analysis of passenger user activity revealed that among the cities of central, northern and eastern Ukraine, Kropyvnytskyi (93% of user activity compared to the period before the full-scale war), Chernihiv (82%), Cherkasy (76%), Kamyanske (76%) and the Dnipro (75%).

Chernihiv has shown an active recovery in 59.2 times since the beginning of full-scale Russian aggression. As a result of the Russian occupation of the Chernihiv region, the number of trips made in March decreased. Since the mid-April, growth dynamics began to gain momentum and increased by 82 percentage points till the end of May. 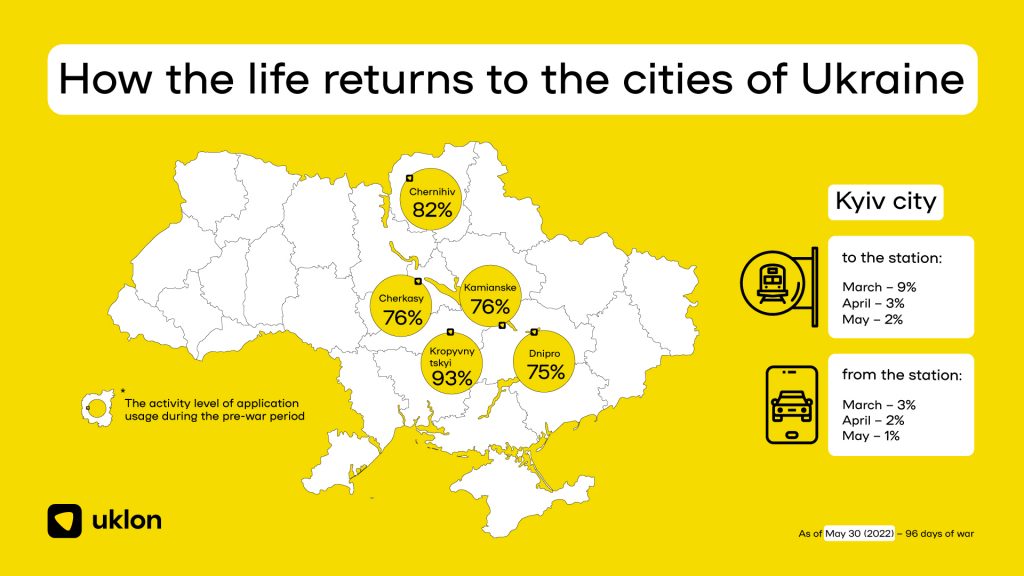 The general picture of the restoration of life in cities shows that central Ukraine is significantly ahead of the south and east in connection with the full-scale invasion of the Russian Federation into the territory of our country. Uklon has analyzed how the dynamics of growth in the use of the service changed from the beginning of the war till the end of May.

According to the data based on research of the usage of the Uklon riding application, during the first month of the war Ukrainians most often left Kyiv (59%), Kharkiv (11%) and Dnipro (5%). At the same time, a significant proportion of people moved to the western regions of Ukraine, choosing Lviv (36%), Chernivtsi (6%) and Ivano-Frankivsk (6%).

Migration within the country varies depending on the presence of hostilities in the regions. It is noteworthy that in May, Ukrainians mostly left western Ukraine – Lviv (25%), Ivano-Frankivsk (7%), as well as Kyiv (12%) and dynamically moved to Kyiv (59%), Lviv (8%) and Dnipro (5%). These pre-determined percentages are determined from the total number of internally displaced users of the service.

In March, the largest share of people leaving was from the capital, accounting for 59% of the total number of migrants. In the following months, Kyiv occupied a leading position among the cities from which Ukrainians left: April (17%) and May (12%). So it is noticeable that the number of those who leave the city is decreasing.

Departures of people from the capital as of March and the end of May are also reflected in a decrease in the share of trips to the Central Railway Station (from 9% to 2%).

The return of Ukrainians to the capital is evidenced by the fact that at the end of May the share of migration to Kyiv has reached 59%, while in March these figures were actually 11 times lower.